It was an honor to be invited to the grand reopening of the newly renovated (and highly legendary) Steel Pier in Atlantic City. Well, the place has a little father to go because although $21 millions has already been put into the restoration of the Pier—which had everyone from the Three Stooges to the Rolling Stone grace its former satin-curtained stage—the reopening only marked the first phase of the Pier’s grand re-emergence onto the AC cultural scene. 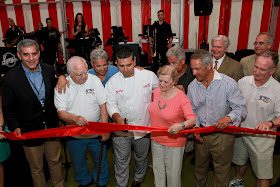 I got to go to the ribbon cutting ceremony led by Cake Boss star Buddy Valastro—whose spectacular cake for the event allegedly got destroyed in the rain--and numerous local AC luminaries and executives. So far The Pier has gotten additional rides (now numbering 26), new games and a much more diversified selection of food stands that include Southern Style ribs and sausage. There is an amphitheater in the works as we go to press, and not too far off—say, in a year or so—A-List artists will be performing on the Pier’s new stage. It’s truly a great and historical thing to look forward to! I saw Totie Fields opening for The Temptations when I was just shy of 9 in the summer of ’69. The odd pairing of acts made for a great afternoon of self-deprecating humor and sizzling soul! I can still see The Temptations performing in matching shiny suits and my brother swore he saw the group posing for photos in matching gold bathing suits on the beach earlier in the day! (Back then, the acts on the Steel Pier bill were all mixed up just like The Ed Sullivan show—the promoters knew the true meaning of the term “variety”!) 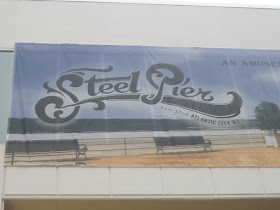 While in AC, I took advantage of checking out James’ Saltwater Taffy, a Boardwalk taffy legend who has seemed to merge with that other taffy legend Fralinger’s (that was featured on an episode of Boardwalk Empire). I got to stay at Caesars for a night thanks to winning the raffle at a recent Atlantic City Tourism press event at the Hotel Gansevoort in Manhattan recently. I stayed there once before in 1987 when I interviewed Smokey Robinson for my rock column in the Sunday New York Daily News. I still remember his opulent suite and the gold trim all around the hotel (as well as his young and pretty girlfriend). Nowadays, Caesars is sleek and modern, but the Roman statues still abound in a giant, classier “modern sculpture” form. They truly make a nice backdrop for the lobby, casino and hallways and small children like to imitate some of the funny positions they are in.
The rooms at Caesars are still as spacious as I remembered. I got one on the top (24th) floor with a breathtaking view of “The Strip” and beach. I perhaps had the best beach view of anyone in AC that day and loved the way the bathroom mirrors have built in “invisible” TV screens! The Qua Spa is considered unequalled on the AC boardwalk.
While walking by Caesars front desk, I spotted a sign nearby that said “Party With A Beatle.” Apparently, Ringo Starr’s artwork was on display in Palladium Room A, and I went there to find myself alone in the vast room save for a rep from a prestigious Philly art gallery who was helping exhibit the art, which numbered close to a hundred pieces. Apparently, if you spent money on one of Ringo’s pop-style pieces of art (which started at $700), you would get to meet him at an hour-long party right before his Caesars show. There was actually an extravagant Ringo-less party for two hours right before his rock ‘n roll majesty arrived, in the hopes that people would buy art (all being sold for charity) and then get to cavort with the famous sticksman.
In case you have never seen Ringo’s art, it is quite whimsical and quirky. It seems to be equally inspired by Andy Warhol, Picasso (in his Cubism period), Roy Lichtenstein and Emilio Pucci. Yes, some of Ringo’s work has that mod, swirly Pucci look, making me think that his wife Barbara Bach must have a closet of Pucci couture (or at least scarves)!
I didn't get to attend the “Party With A Beatle” event at Caesars (no press were allowed in) or his concert that night (it was sold out and there were limited seats for the press that disappeared at least two weeks earlier), but I got to meet him and ask about getting his start in art when he showed up in New York for a similar showing and party at Pop International Galleries this past Monday night. It was a thrill to meet a Beatle and although it’s on the record that his art started getting sold for his self-started charity The Lotus Foundation back in 2002, he said that when he was with The Beatles, “I’d get really bored on the road and just start drawing.” The Lotus Foundation (www.thelotusfoundation.com) benefits numerous charities, including ones promoting peace and benefiting ill children. For more information on Ringo’s art, go to ringostarrart.com
We are secretly hoping that we get to see Ringo on the Steel Pier someday—and we hope to see the Steel Pier lineups like the old days, where the acts are mismatched. Would anyone out there be up for a show with Ringo headlining and maybe Carrot Top opening? Stay tuned to steelpier.com for more great news on how the Pier is coming along. And if you are one of the old-timers who used to go to the Steel Pier back in the day and remember the famous Diving Horse—well, they tried to get that back but there was too much protesting from animal rights groups about it. We personally would think it would be cool if they would come up with an animated diving horse of some kind!