Rolling in the Deep at The Kati Roll Company

On the days that I get out of work later than proper dinner time (read: almost every night), I've struggled with finding a place open late enough near my apartment that is not only quick but also tasty. Luckily, I stumbled upon The Kati Roll Company on 39th and 6th. Originating from Kolkata (Calcutta), kati rolls are the number one choice for street snacking in India, not unlike the humble hotdog of New York City.  The Kati Roll Company first opened its doors in New York City’s eclectic Greenwich Village in 2002 with a simple menu consisting of authentically flavored rolls made with hand-ground spices, homemade parathas and freshly grilled fillings. 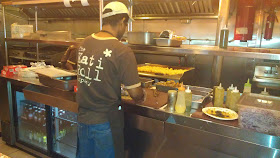 I decided to try three rolls (it was a stressful day -- so a big satisfying meal was totally deserved in my mind) - the Shrimp Masala Roll ($6.75), the Unda Beef Roll ($6.00) and the Unda Chicken Roll ($6.00). To be honest, Indian fast food isn't ever my go to cuisine - my visit here was mostly due to laziness, as this was the only place opened at 10pm that was within short walking distance. Out of the rolls I tried, I thought the Unda Beef was the best - the beef battered with egg was super satisfying and savory. Overall, I thought the crispy Indian flatbread used for the roll was fantastic -- nicely flaky with just the right amount of oiliness to make it rich without sweating grease bullets. 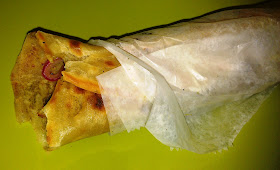 Overall, the Kati Roll is an affordable and filling option for a late night nosh (or even a quick lunch on the run). The next time I'm working overtime (read: probably tomorrow), I know where I'll be stopping to grab some grub before I head on home!