Shape Up Series: Eating Well While Eating (Take) Out!

Last week, delivery.com, an online nationwide delivery service that delivers everything from food to flowers, asked me if I wanted to test drive their ordering system for lunch. To be honest, I was a bit nervous about taking on this task, as I was afraid that eating takeout everyday would my hinder my Shape Up series weight goal, especially coming off a rocking awesome weight loss week. However, I do find packing my lunch everyday annoying and I was assured that there would be healthy options, so I obliged and got ready for a week of lunch sent straight to my door! Was I able to eat well, keep the willpower in check, and lose weight? Let’s find out!

Monday
First day trying the service! Feeling like a kid exploring a new candy store, I log on to my account in anticipation. However, I am slightly disappointed that there are only 12 restaurants that deliver to my work place. Upon further inspection, there were only 7 open for lunch. Also, one had a minimum order of $40! Since I definitely was not going to spend $40 plus on Indian food for lunch (unless I want to fall asleep at my desk) - that left me with 6 choices.

Order: I ordered randomly from a place called El Triunfo. On the site it is labeled as “Mexican” cuisine, but upon further inspection I saw Mediterranean food items on the menu (i.e. hummus, kabobs). I’m always super skeptical of places that serve multiple types of cuisines because we all know the saying, “jack of all trades, master of none”. I decided to play it safe and go with the seemingly healthy grilled shrimp fajitas because having grown up eating Tex-Mex cuisine, I know that fajitas are usually the healthiest option on the menu (if you hold the sour cream and cheese). 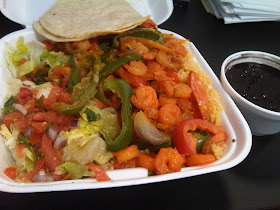 Taste: OH MY GOD!…the shrimps were a lot smaller than expected, not de-pooped (GAG!), and were glowing fluorescent red – it could have been the sauce, but the plate was super messy and I couldn’t tell. I’ve eaten a lot of fajitas in my lifetime and I’ve never had one covered in sauce. Also, only two small dry tortillas were included and the guacamole (what I looked forward to the most) was brown and buried in the rice. Guacamole ALWAYS needs to be served in a separate chilled container to avoid premature browning. At least the food was hot and they did pay attention to my “special instructions” for no sour cream.

Shape Up Series Grade: FAIL! Way too much rice and beans. Unidentifiable sauce on top shrimp could have contained hidden calories, but the entire meal was too gross for me to find out.

Tuesday
Order: Still nervous from yesterday’s disastrous lunch, I decided to go with an old standby, Chili Duck, a Thai restaurant that I like a lot and had frequented many times before. I ordered my usual Seafood Pad Thai and Thai Iced Tea. 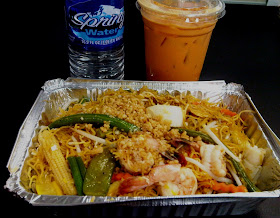 Taste: YUM – a complete 180 from the day before! Not only was everything packaged super neatly (the Thai Iced Tea in its own separate bag, paper dividers for hot / cold items), the food was just as delicious as the times I dined in at the resto!

Shape Up Series Grade: DOABLE! Pad Thai is super easy for me to overdo (because Me + Asian noodles=love), so this was a big test in eating in moderation for me. The portion size was huge as expected and, let me say, I was VERY tempted to eat the entire thing. However, as luck would have it, I was wearing my inelastic “snugger” pants that left no room for extra portions that day. Therefore, I immediately placed half my entrée in a Tupperware container and threw it in the freezer for a future dinner. And that’s willpower baby!

Wednesday
Order: I ended up eating the leftover Pad Thai from the day before for lunch, so I ordered some healthy pre-dinner snacks instead from Montien, another Thai place I heard about but never visited. I ended up getting a plate of chilled rambutan and lychee, along with an traditional Thai appetizer of Hoy-Tod (egg covered mussel aka mussel pancake) 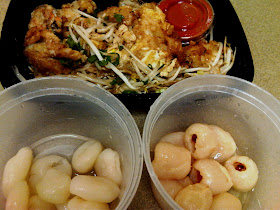 Taste: Oy vey! Where do I start? The chilled rambutan and lychee were definitely from a can. The canned version still is tasty (albeit cloyingly sweet), but for $5.50 each, this was a total rip-off (There was maybe half-a-can worth of a serving included; you can get a whole can for ~$2.00 retail in Chinatown). I thought the mussel pancake was slightly bland and not really pancake-shaped at all, but the worst part was that I FOUND A STRING OF HAIR in my container!!! Granted it was long and black, so it could have been mine, but that’s highly unlikely since my hair was pulled back into a bun. Anyways, that made me lose my appetite real quick.

Shape Up Series Grade: YES! The canned rambutan and lychee, although not as nutritious as the fresh versions, still provide for a small low cal snack option. Like with most Asian takeout joints, the Hoy-Tod’s portion size was more than enough for one sitting, but since the questionable hair grossed me out, I threw the rest it away.

Thursday
Order: Seeing that there were more restaurant options when typed my apartment’s address in the Back Bay, I decided to order my lunch the day before and bring it to work. I know that misses the point of an actual lunch delivery, but after two strikeouts and only few options left (included in those options: one highly questionable multi cuisine-d out place called Boston Central Kitchen that made me nervous when I saw its reviews on Chowhound), I felt that I had no choice. I decided on the boring but very healthy sounding Steamed Chicken with Broccoli at Hong Kong Café (couldn't find website) since this menu item was under the heading “Health & Diet Specials: Perfect for Low Calorie Watchers!” along with the interesting sounding Vegetable Ravioli (no description provided, which was annoying, but I’ll just have to take a risk!) 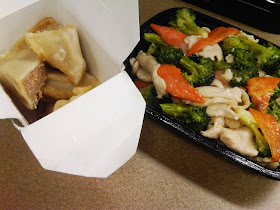 Taste: Mixed. The Steamed Chicken was pretty flavorful – almost too flavorful (and a tad oily) which made me question if this was really as “low calorie and healthy” as proclaimed on the menu. I was sent very greasy Pork Pot Stickers instead of the Vegetable Ravioli -- this I discovered as I bit right into a mouthful of meat (I’m not a vegetarian, but if I was, I would have been really angry!).

Shape Up Series Grade: YES! (if in fact, the steamed chicken was as low calorie as proclaimed). NO! on the drenched in oil Pork Pot Stickers.

Sunday
Order: I was in NYC on Friday and Saturday for Mercedes Benz Fashion Week. Due to my hectic schedule and lack of stable internet connection, I didn’t get a chance to round out my last delivery.com day until Sunday (I did get a chance to browse the restaurants and businesses that were on delivery.com’s NYC list during the brief moments I managed to pick up an unsecure network. Wowza! – NYC had 10,000x better selection and options!). While on the train home, I utilized the free wi-fi to place my order for dinner. Since I hadn’t eaten anything sans a Starbucks Frapp due to a hectic morning that had me criss-crossing Manhattan, I decided to splurge a bit and ordered the create-your-own small calzone from Crispy Dough Pizzeria. I filled mine with Broccoli and Portobello Mushrooms (my weak attempt to incorporate some veggies in an otherwise unhealthy option). 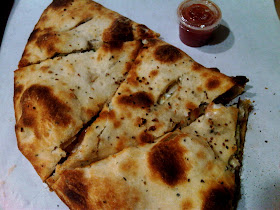 Taste: YUM! The calzone wasn't as heavy or oily as I expected.

Shape Up Series Grade: MAYBE! Obviously a calzone is high in calories and fat -- and this was definitely not touted as a "healthy calzone". But a splurge dish (in moderation) once in a while is fine. Plus I only ate two slices!

Overall, delivery.com’s website is super easy to navigate and the deliveries were all on time with smiley polite delivery men in tow. However, they NEED TO GET A BETTER SELECTION OF RESTAURANTS (at least more than the highly questionable and mostly Asian cuisine places they currently have listed in the Boston proper area)!!! I had a really difficult time finding healthy yet still tasty options to order, which I guess was a blessing in disguise, because it really forced me to exercise strict portion control. Perhaps I would consider using delivery.com in NYC, but I for sure would not recommend using this service in Boston unless such changes are made.

It's the last three pounds - can I do it? Tune in next week and we can find out together!