Esperanto NYC: A Little South of the Border in ABC City!

No trip to New York City for me is complete without trying a new restaurant, especially since I am the Finance Foodie! Since I had only had one fashion week show to attend on Saturday, I utilized the opportunity to break free from the tent at Lincoln Center and head east that night....in fact, waaay far east into what is known as Alphabet City in Manhattan. On the corner of 9th and Avenue C, I stepped into a lively little Brazilian restaurant  called Esperanto.

Already packed with what looked like an very eclectic crowd (a large group of young Spaniards in the corner, a table of Ferragamo-loafered bankers by the bar), I was super glad I had reservations when I showed up at 8pm.  When I was settled in, I was even more glad to see an exotic cocktail menu! Never mind that I had been indulging in wine the entire afternoon at the tents, I ordered the Guava-rita (a margarita made with guava juice) to start. This was a great choice, as the drink tasted fresh squeezed and organic (I could taste the little flecks of guava pulp in the drink -- no guava concentrate in this drink!). 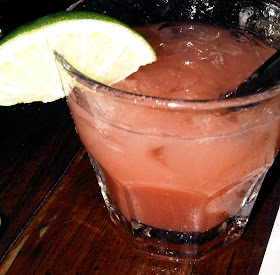 The appetizer menu was also super extensive and filled with all sorts of yummy sounding South American dishes. Overwhelmed, I sought the advice of Esperanto's very helpful and knowledgeable hostess. She suggested I try the appetizer sampler platter along with a grilled calamari salad. This was another great call, as the sampler platter had one of almost every appetizer option! Out of the grilled octopus, olives, cod fish balls, beef empanadas, Brazilian cheese bread, grilled chicken, chorizo, and what tasted like corncakes on the plate, my favorite was the centerpiece -- the tuna ceviche. I loved how the ceviche was marinated in coconut milk, as it really provided a refreshing tropical kick that transplanted me momentarily to the balmy rainforests of Brazil. 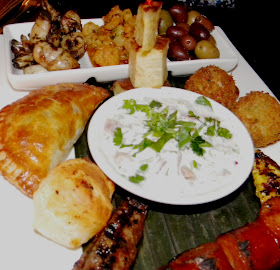 The calamari salad was delicious and the lightness of this dish served as a nice pre-dinner palate cleanser. My favorite part was the shredded coconut and diced mangos sprinkled within the leaves, which created a nice bit of texture for the plate. What a great way to eat your greens! 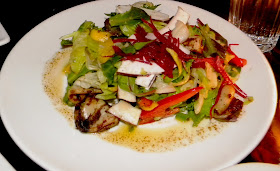 For my main course, I went all out and got a big old Brazilian styled steak with fried yucca "fries" (Yes, it is fashion week and yes I am still on my Shape Up series, but the weekends are my "splurge days"!). I didn't love the yucca as the fries were too starchy for my tastes so my dinner companion ended up eating most of them. This was a good thing because I finished my entire steak! Yeah baby! Now I totally know the suggested serving size for red meat is suppose to be equivalent to the palm of your hand (Esperanto's steak was probably two giant palms), but I COULDN'T STOP!!! Topped with the uber flavorful chimichurri sauce,  my brain said stop but my tastebuds said go....and go and go (until there was nothing left!)

Feeling quite full after realizing I had maybe a pound of meat in my tummy, I was tempted to skip out on dessert......but PERISH THAT THOUGHT ASAP! Dessert is my favorite part of any meal and I'd be darned if I didn't finish this dinner off with a bang. So I loosened my pant buttons, stretched out the waistband, and dived right in to my passion fruit mousse. Luckily, the mousse was much airier and lighter than I had expected, but still full of tang and sweetness. 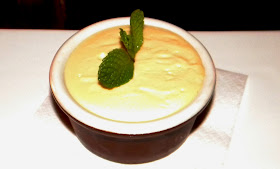 After we had finished our meal, we decided to walk back to 1st Avenue in an effort to burn off some of the indulgence we had just consumed.  This proved to be the only bad decision of the night, as walking around Avenue C and B at midnight is definitely not the safest thing to do (for those who are unaware, this area used to be a notorious drug alley back in the day and still has some sketchy patches). Thankfully, we made it back to 1st Avenue unscathed.

Esperanto is truly a down to earth hidden gem, a refreshing break from a big city filled with big names chefs and their even bigger egos. I plan to go back again for sure -- but next time, I'm taking a cab!