The Half King: Royally Great Gastropub Fare In Chelsea!

There is no better way to end a year than with a final supper before the big diet starts for the New Year! One of my best dinners was at Chelsea’s The Half King, which definitely has the feel of a “neighborhood hang” and serves gastropub fare with a big thank you to classic French, Mexican and Italian fare thrown in for good measure. Scott Anderson, Nanette Burstein and Sebastian Unger opened the restaurant about ten years ago, and Gregory Baumel serves as Executive Chef. Sebastian Unger is known outside the foodie world as the bestselling author of The Perfect Storm, which become a hit movie starring George Clooney.

The gastropub craze really only came “across the pond” in the last year, and we dare say that The Half King is one of the best eateries we have been to this year serving fancier “pub grub.” The appetizers tend to be of the fried variety, including Jalapeno Poppers, Potato Skins (stuffed with bacon or broccoli), Blue Corn Chips and Fried Calamari. 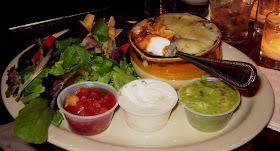 Entrée-wise, we have to give a “thumbs up” to the homemade turkey pot pie (as you can tell from the photo, one look at this and you want to dive in head first…and probably could not resist even if you were on the Atkins Diet)! Then, we went in the polar opposite direction and ordered the healthiest thing on the menu—vegetarian chili, which was a fabulous and fresh-off-the-farm tasting “healthy choice.” Not surprisingly, the most popular item on the Half King’s menu is the Kobe Beef Burger, which comes with arguably the best Sweet Potato Fries in the city. (If Dr. Atkins saw how many of these we indulged in, he would be spinning in his grave). We actually also taste tested the Hellfire Fries and they were spicy but nothing that really made flames emerge from your ears! 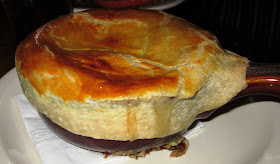 Speaking of healthy choices, the three salads listed in the appetizer section of the menu can all be made into entrée sizes however they are very generous portions to begin with—choose from Shaved Fennel, Baby Arugula & Red Ruby Red Grapefruit Salad, Artichoke & Beet Salad or Baby Spinach & Feta Cheese Salad. 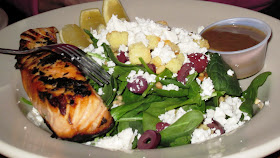 Even though it is not suggested on the menu, ask your server to bring you a sampling of desserts. The Bread Pudding is the truest of the “gastropub” desserts and doesn’t disappoint (some eateries simply make it too sweet…this is perfect). 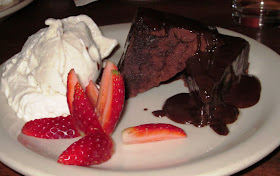 The Half King is located at 505 West 23rd Street in New York City; phone 212-462-4300. The Half King also holds literary and cooking events and so be sure to check out the Readings and Cooking Parties links!