Given the sub zero temperatures and snow mountains outside, I totally have been hermitting indoors the past few weeks. It takes a very special event to make me leave my toasty-like-an-oven apartment these days, and last Sunday’s North End City Feast dinner at Taranta was just what the doctor ordered! The North End City Feast is an annual event held to benefit the Joslin Diabetes Center’s High Hope Fund. Carla Gomes, owner of the popular North End eateries Antico Forno and Terramia (and mother to a son who has been living with Type 1 diabetes for the past 18 years), started the City Feast to raise awareness about this disease and support Joslin’s mission of conquering diabetes in all of its forms. I had previously attended this event last year and had a deliciously wonderful time, so I was totally pumped to support this dinner again this year.

When I arrived on scene, I was greeted immediately by Taranta owner and chef, Jose Duarte. I’ve been a big fan of Chef Duarte’s innovated Peruvian-Italian fusion cuisine ever since my first visit three years ago and had the pleasure of interviewing Jose for my “Dinner with a Chef” series, so it was super cool to see him behind the stove that evening!

Anyways, let’s get on to the food (it’s why you guys are reading this right? :) The first out of the six courses for the night was a mashed potato layer cake stuffed with crab meat. Honestly, I was a bit disappointed about this dish as it was slightly lukewarm and the potatoes were a bit bland.

However, redemption was had by the second dish, a paprika infused “seafood bowl” (octopus, calamari, clam and cuttlefish) served with garbanzo beans. Seeing the fiery redness of the sauce, I was initially worried the dish was going to be too spicy for my tastes, but it was quite mild and very flavorful. 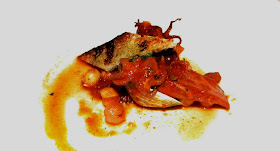 The third dish was even tastier than the previous course (cue theme song of the night: “Keeps Getting Better”)! The simple but satisfying lobster ravioli and jumbo shrimp topped with a tantalizing cherry tomato mascarpone cheese sauce (sprinkled with festive black salt) was totally divine! As I looked around the room, I was glad to see I wasn’t the only one who used the table bread to lap up the heavenly sauce on the plate.

Just when I thought it couldn’t get any better, in came the fourth dish – an Auyama (aka the latin pumpkin) gnocchi plate topped with duck confit, roasted pecans, and a sage cream sauce. Hands down the favorite dish of the night!! The nuttiness of the walnuts really brought out the earthy tones of the cassava root, and the richness of the sage cream sauce and the duck really brought the entire dish together perfectly. My only complaint was that the portion size was so small – Shape Up diet be darned, I for sure could have eaten an entire bowlful! 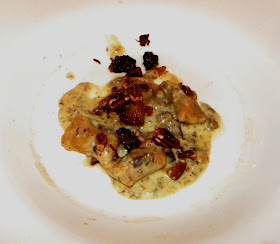 ***we now interrupt this dinner recap to bring you a very special guest who dropped by: Dana Barros, retired Boston Celtic and supporter of the Joslin Diabetes Center! 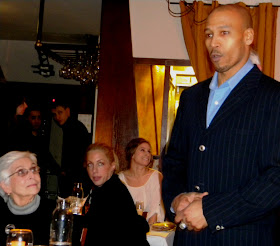 Dana stopped by our table and of course, the first thing our table wanted to do was to check out his championship ring (from the 2008 NBA Finals). Sorry for the lame photo, but the bling was too bright and must have blinded my camera! 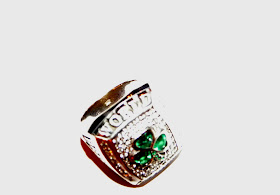 Ok back to the food! The fifth course, my second favorite in the night, was a “stick to your ribs” braised short rib and Chuño (a type of Peruvian potato) topped with melted Gruyere and Parmesan cheese. YUM! The short rib was tender and fall off the bone good and the bold nutty flavor of the guyere really helped bring out the essences of the Chuño potato. 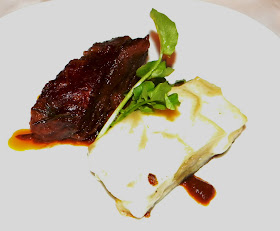 The night was capped off with a lovely Lucumisu, Jose’s playful Peruvian spin on a traditional tiramisu. The dessert was infused with Lucuma, a Peruvian fruit, which gave it a nice fruit sugar kick. 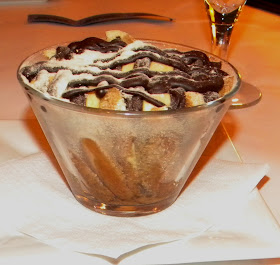 Having gone to countless number of mass-produced charity dinners, I know that it’s not easy to keep the quality consistent if you are trying to feed multiple heads the same dish in a short period of time. After eating countless amount of typical pre-set charity dinner meals (i.e. salad, chicken or pasta entrée, chocolate cake), I totally give props to Taranta for creating an innovative yet tasty menu for this event. Chef Duarte has always been on the leading the charge for using exotic ingredients in his creative cuisine and employing technological advanced to improve the dining experience (i.e. the use of QR codes to learn about Taranta's menu items) – as a frequent restaurant diner, I am thrilled to see this take place and hope other Boston restaurants can follow in his footsteps. 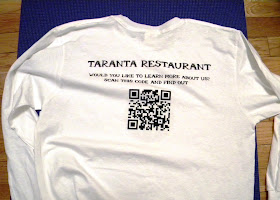