APORKALYPSE NOW: High on the Hog at the NYC Beer, Bourbon & BBQ Festival!

The Whole Hog session of the recent Beer, Bourbon & BBQ event this past weekend at La.Venue in NYC promised "unlimited samplings of beer, bourbon, food, and a pulled pork BBQ dinner plate with fixins"--so how could any foodie pass that up?!? Four different BBQ joints--Hill Country, And...The Little Red Pig (Marshville, NC), Kloby's Smokehouse (Laurel, MD) and Blacksauce Kitchen (NYC)--served up every part of the hog (you probably could have asked for the snout or feet if you really wanted them)! And if you wanted bourbon, hard cider, booze and whiskey--it was unlimited and all the big and small makers were there...but we have to admit, we got some "small to medium" pours in the designated BB & BBQ glasses we got on the way in. 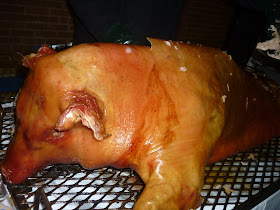 The event was totally sold out, with a line going all away around Eleventh Avenue from 28th to 29th Streets more than an hour before the doors opened (who ever said that New Yorkers live on cigarettes and Tic Tacs)? It appeared that about 1,000 booze and BBQ lovers were in attendance…so my friend Gail and I snagged seats as soon as we could get in the door (there seemed to be seating for only 80 to 100 people). Each food ticket allowed you one plate featuring a pork item, side (such as spicy baked beans) and hush puppies or maybe even some cole slaw or collard greens...depending on what table you went to. Additional items, including a juicy plate of ribs or about 12 ounces of brisket, cost an additional eight dollars (despite the $85 dollar ticket price to enter). Hey, at least the portions for generous! 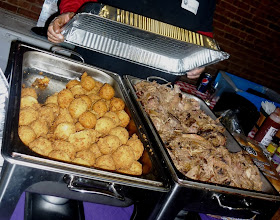 We centered our night on Kloby's--the one place who gave you homemade hush puppies and sold the most amazing ribs and brisket (you can see both pictured here). Brisket has less fat than pork and most cuts of beef as well, so it is a real art to cook it slow enough to retain its moisture. We think that Kloby’s brisket might actually be a “best ever” in our book! 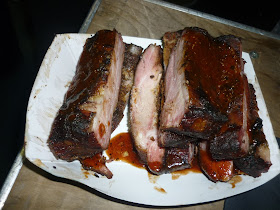 Some of the ladies looked a little freaked out by the sight of three or four whole pigs lying on table tops, but it didn't freak me and Gail out any--and not because we enjoyed a little pear-flavored hard cider with our food, either. I guess whole hogs are not as common at NYC events as they might be in the South (or Hawaii for that matter). If the hogs upset you, there was plenty of great bourbon and scotch and Makers Mark was nice enough to give out "airline bottles" as samples to anyone who went up to their table. 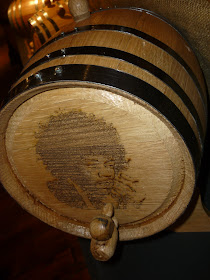 There was also a plethora of microbreweries, and the younger males in the crowd seem to line up for those as if beer was being removed from the planet the next day! The Magic Hat stand seemed to always have a line of 60 or more people, but there were also "booze ephemera" exhibitors as well. For instance, Thousand Oaks Barrel Company sold working oak barrels for aging homemade wine, whiskey, bourbon, beer, brandy and tequila--and all their barrels had hand-etched designs including the one we have pictured featuring Jimi Hendrix on the front! Jimi was probably more into psychedelics than booze, but we think it's a neat rock memorabilia item anyway. 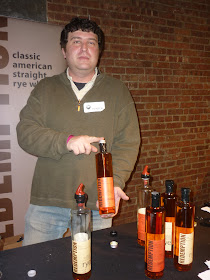 For lovers of hot sauces, Torchbearer Sauces had a display with dozens of hot sauces and salsas of pretty much any level of intensity including Annihilation Sauce (the name speaks for itself). Their colorful labels that are reminiscent of R. Crumb art from the late 60s drew a lot of attention from the festival goers, and the looks on their faces when they dipped a cracker in a particularly hot sauce was priceless! 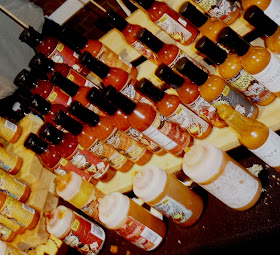 Even though it was the most crowded event we have attended in the recent past, the Beer, Bourbon & BBQ Festival truly serves up the "product" of the topflight vendors in each category. It would take all day and night to get through all the booze stands at the Whole Hog Session we attended, but the Festival offers different programs including lectures by top pitmasters. Check out www.beerandbourbon.com to check out their festivals in your cities. We suggest that if you do a Whole Hog Session, dress warmly, wear comfortable shoes and come with an empty stomach--and hit the BBQ before you start on the booze! (By the way, you get to keep the cute logo beer glass they give you on the way in as a souvenir.)