Since I moved to the East Coast, I’ve looked forward to Columbus Day weekend every year -- not because of the long weekend (I’ve never had a Columbus Day off), but because I get to make my annual trek to NYC for the New York Wine and Food Festival. This three-day extravaganza brings out all the top chefs for a weekend of fantastic events and dinners around the city, with all proceeds benefiting the NYC Food Bank and Share Our Strength! Team Finance Foodie was lucky enough to be invited again this year to cover the festivities – hooray for great foods and great causes! (Our coverage last year can be seen here and here)
My first event of the weekend took me to the Tishman Auditorium at The New School for a culinary demonstration with the loveable and huggable Rachael Ray. She cooked three dishes for us in 30 minutes – a pan-seared halibut with bacon served on an English muffin, a pork chili served with a fresh flour tortilla, and a big beefy burger topped with a parmesan black pepper sauce.

What I learned
*When grilling burgers, make an indentation in the middle of burger patties with your thumb to keep the patties from swelling in the middle.
*Rachael would “eat her arm if it was made out of bacon" (yes folks, that’s how much she loves bacon!)
*Rachael lives a few blocks away from the Tishman Auditorium (12th street between 5th/6th avenue). If I were one of her lucky neighbors, I’d definitely try and drop by to “borrow a cup of sugar” ;)
*Rachael has her own line of dog food, Nutrish, which samples were passed out at the event – now dogs around the world can eat as well as humans!
Event Highlights
*Rachael’s bubbly and animated personality as she took questions from the audience while she cooked - a real multi-tasker!
*The wonderful scent that enveloped the room as the bacon and halibut sizzled on the grill - mmmm droool!

Event Lowlight
*The wonderful scent - magnificent to be surrounded by, but painful for my empty stomach. As soon as Rachael said her final farewell, I bee lined it to the nearest deli for a sandwich. 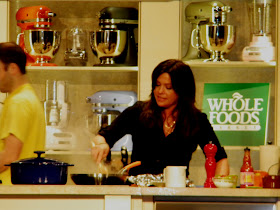 Check back soon for more of my New York Wine and Food Festival weekend, including a behind the scenes look at the Food Network, the Cosmopolitan Las Vegas Late Night Party, and the Grand Tasting!

100% of the net proceeds from New York Wine and Food Festival ticket sales support the Food Bank for New York City and Share Our Strength, organizations that help eradicate hunger in NYC. For more information about these charities and/or to help support these wonderful causes, please visit their websites.