Okay I admit it -- I really went to the recent launch of Swatch watches' New Gent Collection at the Gansevoort Park Avenue penthouse because I write for the tween entertainment mags and need all the four-one-one I can get about cast members from the Twilight flicks (our readers' favorites). Seeing that the New Gent event's host was Nikki Reed and her pal Chaske Spencer (whom is a doll to interview and will be filming Twilight: Breaking Dawn with Nikki starting next month in New Orleans) -- well, I just had to drop by and check out the scene!
Rounding out the star studded party was actress Susan Sarandon, actress Kelly Rutherford, the fabulous rapper Fabolous, and R&B king Chris Brown -- who almost caused paparazzi bedlam as he walked in and took a special corner booth with Swatch Global Brand Manager, Patricia Higgins.
A lot of the press had to "talk to the hand" as publicists tried to keep only authorized photogs on the "firing line." We here at financefoodie.com know our strengths - that were obviously aren't a WireImage or Getty - so please pardon us for our slightly grainy photos. 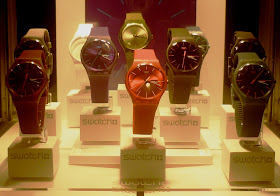 The new collection was on display all over the Gansevoort penthouse and were inspired by the Swatch Gent originals from 1980’s -- however, the new models have bigger dials and fresh winter colors that included a fire engine red, black and white. Party guests enjoyed specialty drinks named after the watches and were treated to sounds by violinist Caitlin Moe and DJ Mia Moretti. But the real highlights of the evening? Actually watching models Jessica Stam and Jessica White eat sliders (who knew they actually chowed down?) and taking home one of the red Gents watches, Swatch logo-ed baseball cap, and gourmet cupcake on a stick home to enjoy! Guests on their way out could be found swapping their watches for one in a color they they preferred, but that should not have been a surprise -- seems that most party goers preferred the red followed by the black in a casual poll taken in the Gansevoort lobby!