2010 New York Wine and Food Festival: Behind the Scenes at the Food Network

After the Rachael Ray demo, I headed back downtown to Chelsea Market for my next event -- a behind the scenes look at the Food Network. Now there are only two channels that are on constant replay in my apartment (CNBC and the Food Network), so I totally felt like a kid in the candy store about hanging out backstage at one of my favorite stations!

To be honest, work was quite frantic during the week before festival, so I didn’t read the details of this event too carefully. So imagine my surprise when I was taken to a TV set, complete with a chef’s kitchen, tables and chairs for the audience, and a full place setting at each seat! What I thought was a walking tour of the Food Network was actually a four-course cooking demonstration / tasting session (with wine pairings) lead by Food Network’s Executive Chef, Robert Bleifer. 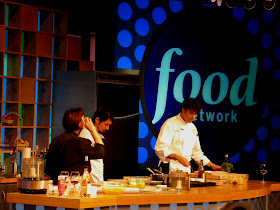 Chef Bleifer, who has been helming the kitchens at the Food Network for 9 ½ years (he’s the guy that’s in charge of creating the menus and procuring all the necessary ingredients for most of the shows), cooked four dishes for the attendees to try: a celery root and mushroom soup (appetizer), a cheese risotto with mushroom, chestnuts, and butternut squash (1st course), a pork chop with pear chutney (2nd course), and an apple galette with walnut frangipane and creme fraiche (dessert). 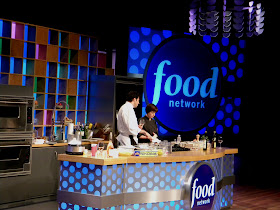 Sorry for the lack of food photos – since this live demo was being filmed, there were strict rules for photography

What I learned
*To clean a mushroom but keep its color, brush off the caps with a dry towel (instead of running them under water)
*Celery root is actually the root of celery; it has the consistency of a potato and has a nutty flavor
*Chef Bleifer prefers to cook with Kosher salt because he can control each grain at a time (fine salts are better for baking since it spreads more evenly and dissolves faster)
*Always keep your knives sharp -- its easier to injure yourself with a dull knife vs. a sharpened one (contrary to popular belief) since it takes more effort to cut foodstuff when your knife is dull
*Brown glass keeps light out the best -- to keep olive oil from breaking down in the sunlight, buy the olive oil in the darker glass (brown is preferred, but green is also works)

Event Highlights
*In this three hour long class / event, I learned a motherload about cooking everything from appetizers to dessert (see above). The knowledgeable audience also aided to my education - questions such as “What brand of knives do you [Chef Bliefer] use?” (Answer: Wusthof) makes me believe there were quite a few perfectionistic cooking aficionados in the audience!
*Four course dinner! As opposed to a traditional demo, where the audience can only salivate over the food, the audience got to eat each dish that was being prepared at this event.
*Awesome giftbags – on each chair was a Food Network tote bag that held a Food Network cookbook (which I got autographed by Chef Bleifer) and an issue of the Food Network magazine (which served as fun reading material on my ride back to Boston)!

Event Lowlight
*It was freeeeezing in the studio! Being from Texas and deathly afraid of the cold, I totally cursed myself out for not bring my jacket

Check back soon for more of my New York Wine and Food Festival weekend, including the Cosmopolitan Las Vegas Late Night Party and the Grand Tasting!

100% of the net proceeds from New York Wine and Food Festival ticket sales support the Food Bank for New York City and Share Our Strength, organizations that help eradicate hunger in NYC. For more information about these charities and/or to help support these wonderful causes, please visit their websites.