Ritzin' It Up In Ft. Lauderdale at Via Luna!

Via Luna is a divine modern Italian eatery in the lobby of the sleek but opulent Ritz Carlton in Ft. Lauderdale. Centrally located right along the hottest beach area, diner have the option of eating inside and enjoying the high ceilings and intimate lighting or dining al fresco on the deck of the hotel which is only about fifty to sixty feet from the Atlantic shore line. I had managed to escape the ice cold NYC weather by extending the holiday week between Christmas and New Years--and I wanted to take advantage of the 80 degree weather the best I could--so of course I took an outside table. 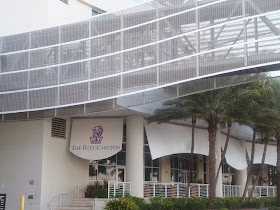 You are immediately served a fresh baked loaf of rosemary covered Italian bread that is a meal in itself--it comes with olive oil complete with baked garlic slices in it, which is delightful. It is hard not to consume six or seven slices before your meal starts. If you are dining alone like I was, without asking the staff will bring you over a couple of papers to read (they took note that I had a NYC accent, so they brought me a NY Times which was so thoughtful)! I was in the mood for a good plate of pasta with red sauce so I ordered the Buccetini ($20)--which is a type of pasta pretty hard to come by outside of Arthur Avenue in The Bronx. It looks like super thick spaghetti but there is a narrow hole inside. The Buccetini was homemade and was top with a red sauce made with San Marzano tomatoes, a touch of cream, a little white wine and locally grown shredded basil. It was topped with fresh Parmesan and was probably the best pasta dish I have had in the past year. The sauce was not sweet, and lightly spiced with aforementioned basil and maybe some oregano, sea salt and pepper. The touch of cream was just right and the wine added character, but what I loved most about it was that the tomatoes tasted so fresh.
I wanted to have a large bowl of veggies not as a side but more like a second entree. The portion of! Brussels Sprouts I ordered was roasted in a light coat of EVOO ad sprinkled with sea salt and freshly ground black pepper. It was a big two to three cup portion for $8‎, and it could easily be shared as a side by two dinners. The inside of the sprouts were soft and warm and the outsides were hot and well-toasted/crunchy.
For dessert I had the tasty and artfully arranged Pistachio ‎Amaretto Cheesecake ($9) with chocolate sauce and house made whipped cream. I loved the dark chocolate twig lying next to the rectangle of cheesecake as well as the light pineapple glaze on top, which actually was given an iridescent glow by the pastry chef. The really special thing about the cheesecake was that the crust was flourless and made almost exclusively of chopped pistachios with just melted butter and a little brown sugar holding them together. This was one of those desserts almost too pretty to eat and upon initial inspection, it looked like a Mondrian painting. It is hard to choose a dessert at Via Luna because one is more exotic than the other and all are so tempting. When I go back to Via Luna, I want to try the Limoncello Genoise--Italian sponge cake, ladyfingers and raspberries--and the Italian Duo--tiramisu crunch and wild berry panna cotta.‎ Did I fail to mention the Poached Pear Crostata ‎with vanilla gelato, baby pears and caramel sauce? It's pure culinary genius to think up all these sweet and savory combos, and they keep all desserts at a reasonable $9.

‎The current powers that be at the restaurant try to keep all the produce and fish used locally grown and raised respectively. The current Executive Chef is Fabian Gnemmi, formerly of the Ritz Carlton in St. Thomas and the Executive Sous Chef is Enrique Galan, who recently came over from Miami Beach’s legendary Eden Roc Hotel. These two are masterful together; they are creative at mixing Italian cuisine with Modern American and always throwing in a twist of something exotic along the way—and as far as presentation and service goes, the Ritz lives up to its legend!