The last day of my New York Wine and Food Festival weekend went out with a bang - as in brunch Ms. Paula Deen, aka the queen of southern comfort food. Being from the south, my mouth salivated as I glanced at the menu, which featured Paula's favorites from south of the Mason-Dixon line. 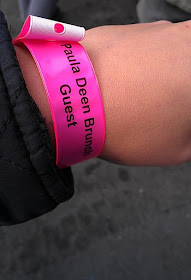 I arrived bright eyed and bushy tailed to Pier 60 and was blown away by the selection of food items. The brunch started off with a plate on each of our seats - a healthy fruit skewer, a yogurt berry and granola parfait and a few mini pastries. These were pretty standard and seeing the long list of other offerings - I decided to only indulge in the fruit (gotta get that Vitamin C in!).
The rest of the brunch was served buffet-style. At this point, Paula had not yet arrived, so I unabashedly took this opportunity to eat up. Now for those who know me, I grew up in buffet restaurants (being from Texas, where bigger is better, my family is obsessed with them) and have learned tricks to eat everything worth eating but not everything while trying everything. Basically, in simpler terms, this means I sample everything but only really eat the things I like - this is also a great trick to keep the pounds off. I started off with a plate of scrambled eggs and chorizo, pecan crusted french toast with chocolate drizzle, chicken creole with rice and a roasted root vegetable salad. I thought the french toast was a bit dry (probably should of slathered on more of the chocolate drizzle), but the scrambled eggs and chorizo was the real standout. Super rich and flavorful - I had to go back for seconds.
The next plate was a sampling from one of the local chefs who was brought in to prepare Ms. Deen's favorite recipes. Given that Paula was recently diagnosed with Type 2 diabetes, there were quite a few "slimmed down" versions of her usual butter filled creations. I was especially impressed by Delicatessen's Mediterranean Egg White Frittata served with turkey hash (FYI, we visited the big D and wrote about it a few months back). Usually I stay away from using egg whites (so bland and tasteless - plus all the nutrients are in the yolk), but the cured black olives and tomatoes made this dish super tasty and exciting to the tastebuds. The farro was also a nice compliment to the egg and helped give the plate more fullness without being too fatty.
Plate four was a beer can hen from Hill Country. The consistency on this was mixed - my first piece was super juicy, so obviously I went back for seconds. The second piece however, was a bit dry. Guess that's the problem with serving chicken buffet style. The carrot jalapeno relish that topped the hen was quite delish and tangy though.
By this time, Paula - with family in tow - had arrived, so it was time for me to put down my knife and fork and meet the lady. My first thought - oh my goodness, the women was unrecognizable from her buttery days!!! Now obviously the weight loss was brought on due to the diabetes, but wow - she looked really good! In person, Paula is super Southern, super sweet and now super skinny.
I felt kinda guilty moving on to desserts after seeing Ms. Skinny Minnie, but Norma's PB&C Waffle 'wich proved to be too tempting. This choco waffle filled with peanut butter and toffee crunch was super decadent and definitely not healthy - but gosh darn it - it was sooooooo good (and my fave dish overall)!
There were also a few other desserts I sampled from Baked in Red Hook, BK (note to self: need to make it to BK more - there are some pretty awesome restos outside Manahattan). The brownies covered in salted caramel were super fun, though I was glad they were so bite sized - any bigger and I for sure would have overindulged.
Overall, another fantastic New York Wine and Food Festival this year. So until next October...eat well my friends!