Even though I am one that appreciates dining at exotic and exquisite restaurants, there are some days when I crave simple big portions of comfort food. Having grown up in the suburbs where chains are a way of life (family dinner nights at Red Lobster were a staple in my household), I usually try to eschew these establishments now. However, there are some fantastic chains that I still continue to visit - mostly because the food is just so darn good - and let's be real, there wouldn't be chains of these places if there wasn't a demand for their consistent across the board cuisine. 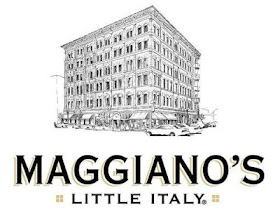 Maggiano's Little Italy is an excellent example of such previously mentioned high quality chain. I'd been to the Houston, LA and Chicago branches - but hadn't tried the Boston location until last Sunday. Maggiano's just rolled out their new "Chef's Summer Grill" menu items (available only from June 28th to September 12) - so of course I thought this was the perfect time to make a sojourn to the Boston outpost.

I started off with the Herloom Tomato & Shrimp Flatbread ($12), which was topped with arugula, cucumbers and a creamy basil dressing. Although I was slightly annoyed that the dressing had a mayonnaise-like texture (the waiter told me that the dressing was more of an Italian vinaigrette based sauce), the shrimp was very flavorful and the flatbread had a nice crispy consistency.  However, the cucumbers were a bit awkward and felt like an odd last minute addition to the dish. 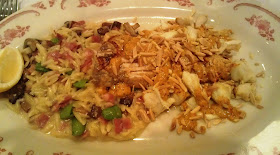 I had the Grilled Mahi Mahi with Carbonera Orzotto ($23) for my entree. This dish was absolutely fantastic - the mahi mahi was flaky and the roasted pepper almond pesto (that included generous slivers of almond) gave the fish a delicious nutty flavor. But the carbonera was my favorite part - I felt the snap peas, mushroom and ham mixed in with the al dente orzotto was a terrific combination of textures and flavors.

I was pretty full by this point, since the portions here are HUGE, but what's a meal without dessert? (Answer: Incomplete). I decided to get the dessert sampler ($10), which consisted of a "mini" crème brûlée, chocolate zuccotto cake, tiramisu, apple crostada and cheesecake. Ummmm....if these were considered "miniature", I have to believe that the regular sized portions were probably the size of my head! My favorite out of the five, by far, was the apple crostada. The pasty crust was warm and buttery, and made for a great complement to the slightly tart apples and coldness of the rich vanilla bean ice cream.

All and all, the meal was filling, reliably yummy and affordable. As a bonus, I even got to enjoy leftovers for the next day's lunch - two meals for the price of one? Sold!