We were lucky enough to score an invite to Delicatessen's recent Summer In Soho affair, which brought together the food press, regular customers and just some good looking peeps from "da nabe." The whole purpose of the affair was for exec chef Michael Ferraro and pastry chef Kate Cowan to show off how they've tweaked the menu for the height of summer, when the all-day eatery is at its most crowded. In case you have not been to Delicatessen, it specializes in"international comfort food" although the beautiful people who flock there hardly look like they gorge themselves on the creative and generously portioned cuisine there! Delicatessen truly looks like a set from Sex and the City, but the food is super luscious and they are not afraid to deep fry when they have to! 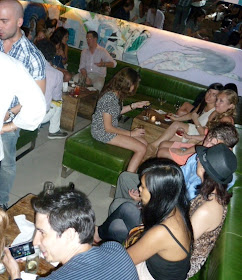 Of course, we downed a couple of the Tilly cocktails before we started chowing down. This red-pink drink consists of muddles strawberries and limes shaken with Satisfaction Vodka and pomegranate juice. Dare we say it? We got enough"satisfaction" for Mick and all the Stones--and then some. There is truly nothing like a strawberry cocktail on a humid NYC day, and this one's  awinner because it's not only refreshing, but all the lime pulp gives it an extra refreshing kick.

We admit that we favored three of the passed hors d'oeuvres in particular, the first being the Flash Fried Tuna Avocado Rolls, which were fresh and crispy and given a special kick by the Sambal chili sauce served on the side. The Sweet Sesame Chicken Lettuce Wraps were actually pretty health-conscious and utilized crisp Bibb lettuce, ground cashews and pickled green papaya. So summery and fresh these lettuce wraps were that all we have to say is, we hope they plan to serve them year round--these should be staples on the menu. 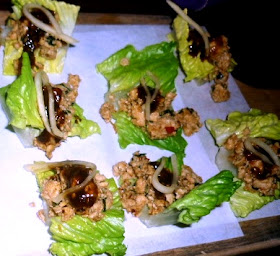 The Tomato And Mozzarella Salad was not a salad at all but rather marinated tomatoes and fresh mozz with a tempura coating. They were classic Japanese meets classic Southern Italian and had the perfect degree of saltiness and the gooey goodness that only deep friend salted, locally made mozzarella can give. Maybe they just use the word "salad" in the title so that diners feel like they are sticking to some sort of health regime! 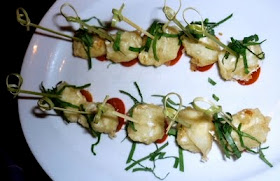 Pastry chef Cowan's desserts did not disappoint, either. The Maple Bacon Beignets were exceptional--they were served piping hot with a side of Bourbon Crème Anglaise for dipping. There weren't actual chunks of bacon, but rather a subtle bacon flavor--the maple was definitely the predominant flavor here. We have the feeling that chefs in New Orleans, where beignets originate, just might start picking up on this item for their own establishment once they try these! 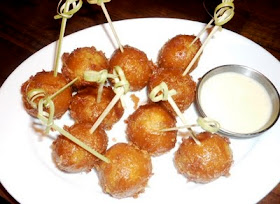 The chocolate layer cake is actually served in small portions akin to a large petit four. The icing is made from dark Valrhona chocolate and is rich, but doesn't give off that "too much of a good thing" flavor as too much dar kchocolate icing can. The cheesecake lollipop is creamy and not too sweet, and each one is big enough for two or three bites. The good thing is that they will let you order a mixed plate of these small desserts as a regular dining customer. Not surprisingly, the Cheesecake Lollipops are the most favored passed dessert at parties catered in the lovely rooms downstairs at Delicatessen. 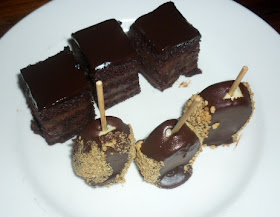 For more info, go to delicatessennyc.com. Reservations are suggested but not mandatory.