When you've got a low-carb diet in the works for the new year, one of the biggest indulgences you can get away with is some really tender, juicy meat. Interestingly enough, we have found that ordering through Omaha Steaks has been the easiest and most economical way to do a low-carb diet! With steaks at New York supermarkets like Gristedes' and D'Agostino's being 16 bucks a pound and up, Omaha Steaks actually offer better bang for the buck--plus they delivery directly to your door in those cool, insulated styrofoam boxes. I like to thaw out their meat in my fridge for at least 15 hours before preparing, so that it cooks faster and comes out more tender. 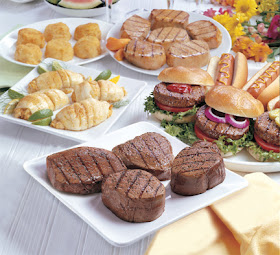 My all-time OS favorite is the classic six ounce Beef Tenderloin (Filet Mignon), which cost $89.99 for eight right now. You can also get a five-ounce size if you want to keep your portions in check or buy these tender filets with bacon wrapped around them (hey, this kind of rich eating works on a low carb diets!). One of the beautiful things about Omaha Steaks is that everything is in a precut exact portion size, so you know exactly how much you are eating. This is a real blessing for dieters who don't want to weigh and measure all the time. Their Ultimate Chicken Burgers (sometimes priced as low as $17.99 for eight four-ounce burgers in a box when they're "Today's Featured Item" but usually go for $49.00) and Chicken Breasts (four 4-ounce portions for $23.99) are pre-portioned into plastic packages that you just peel back and let stay in the freezer for six months to a year without getting any freezer burn. (Now, that's much better than packing up and freezing meat yourself!) 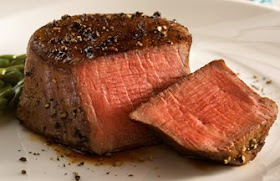 We have to say that the Ultimate Chicken Burgers are the tastiest chicken burgers we have ever had--they are very moist and only 160 calories! We like them even better than the Omaha Chicken Breasts, honestly, plus they out-taste any TURKEY burger we have ever had. The Pork Tenderloins are also fabulously tender and versatile--this is a super lean cut of pork that cooks in about five minutes (we used a cast iron pan with a high flame, BTW) and clocks in at only 200 calories. A package of four nine-ounce Pork Tenderloins are going for only $29.99 as we go to press and serve eight people. 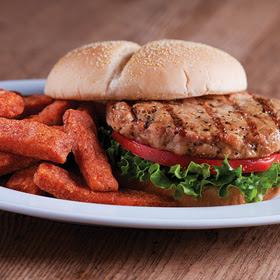 Omaha Steaks also carries pre-marinated meats, seafood (their Breaded Coconut Shrimp is a big family favorite at $24.99 for two pounds) and sides (including Stuffed Baked Potatoes at eight 5.75-ounce portions for only $11.99 on sale). Dessert-wise, a pre-cut slice from their 10-inch Cheesecake Sampler clocks in at around 450 calories each and we admit--much to our nutritionist's chagrin--that we have replaced meals with these! A 10-inch cheesecake is currently on special for $29.99 and has four slices each of four cheesecake styles (Strawberry, Traditional New York, Marble and Almond). 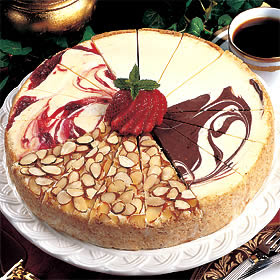 The best OS deals could be had by online by ordering combo packs which often are as much as 70 per cent off--and then when you spend at least fifty dollars, they will through on bonuses like eight Steak Burgers for $9.99. For my money, I think Omaha Steaks blows shopping for meat at any of the New York supermarkets (or even Dean & DeLuca or Citarella's, both considered the city's ultimate gourmet food stores) out of the water...and into the marinade! 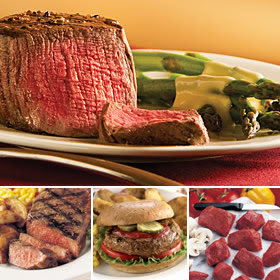 Ou current favorite Omaha Steaks combo pack, BTW, is the American Celebration which includes four 5-ounce Filet Mignons, four 5-ounce Top Sirloins, four 5-ounce Boneless Pork Chops, two 4.5-ounce Stuffed Sole With Scallops & Crabmeat, four Omaha Steakburgers, eight Gourmet Franks and a 10-count package of Potatoes Au Gratin. This combo is usually $229 when purchased "a la carte," but on the OS site, it costs only $59.99. Check out www.omahasteaks.com for many combo deals such as this one!

Omaha Steaks wants to give one of my lucky readers a $100 gift card to use on OmahaSteaks.com.

There are THREE ways to enter
1. REQUIRED: In my comments section, tell me your favorite way to cook steak? (Mine is medium rare - love to see a little blood!). Also please include your email address so I can contact you if you win!
2. Follow Finance Foodie on Twitter (leave separate comment telling me this)
3. Reblog / Retweet this giveaway (leave separate comment telling me this)

Contest ends Wednesday, March 2, 2011 at 5pm EST. Winners will be chosen via random integer generator on random.org announced on the financefoodie.com site shortly afterwards that night!

Disclosure: Omaha Steaks is providing the gift card for this giveaway.