Every New York Fashion Week is a rush of craziness, color and being crushed tight into the shows, both on s‎ite at the Lincoln Center "tents" and at the many off site shows. You kind of get used to having to sit tight to people from riding the subways here, but how close the seats are arranged at the NYFW shows gives the phrase "packed in like sardines" new meaning, LOL! My favorite shows never seem to be the "big" ones by the legendary designers such as Ralph Lauren or Oscar De La Renta, but rather the lesser-known designers who aren't afraid to put an edge to their designs. I also admit to a soft spot for evening wear, and that's why I love to go to Lela Rose and The Red Dress Collection each year. 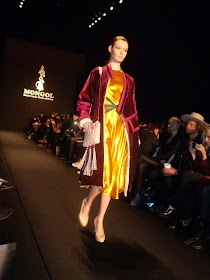 Speaking of The Red Dress Collection, this year's show as always featured a bevy of beautiful female celebs of all shapes and sizes in glamorous (you guessed it) red gowns by designers both famous and obscure. ‎The audience is always full of heart disease survivors sporting red gowns who head off to a special party presented by the American Heart Association after the show. My favorite moment of the show was seeing TV legend Barbara Eden doing the famous I Dream Of Jeannie arm movement several times. It made the audience go mad. The popular vocal group Fifth Harmony both modeled and performed at the end of the show with the other models dancing behing them. 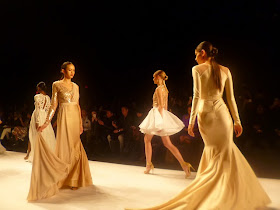 Lela Rose's understated elegance for evening was mind-blowingly on display as she showed that patterns and plaids could be mixed, even in formal wear. Her beading is subtle and her designs are timeless enough that a woman can keep them in her closet for 40 years, making the $1500 median price for one of her cocktail ensembles well worth it. Concept Korea was my favorite show in terms of highly sophisticated work and "night on the town" wear--or rather, clothing that looks as correct in an office setting as it does in a Soho eatery. There were plenty of gorgeous silks and tweeds, and flowing pants that were just a stunning look for someone of any shape or size.‎ Mongol also rocked day-to-evening looks. Skirts were of all different length and jackets all had an element of surprise whether it be unusual color combinations or mixed textures in the fabrics. Traditional Mongolian styles were updated and made easy-to-wear, and traditional Mongolian lamb fur was used liberally. Maximum evening glitz was sported by the models in the Ese Azenabor show "off campus" at the Affinity Hotel. This young designer borrows themes for her clothing from the arts and culture of the past and she openly admits that the collection shown duing This past NYFW was inspired by Henry VIII and the rich jacquard that were so popular at the time. Her fabrics were all superluxe, and the hand done beadwork never failed to surprise. Azenabor often surprised with unusual evening wear like one-sleeved silk jumpsuits and made stunning gowns of brocade that Ann Boelyn would have been proud to be seen in! Some of the styles were actually named after famous European royalty. Her love of metallics was very apparent as well. 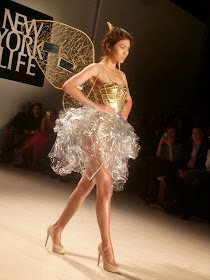 Fashion Week is always chock full of outrageousness both on and off the runways but two of the most outrageous (and entertaining) shows that I caught were New York Life/American Heart Association and Art Hearts shows which were back to back in the tents. These were long shows--about 45 minutes each--and we're multi-dedigner. The New York Life Show included men with purses and hot pants, as well as some ensembles that looked like repurposed prison garb. Some models had checkered bandanas over their faces, making me wonder how they did not trip and fall. Suntly elegant gowns that were First Lady worthy were in the same show, making it a "fashion for everyone" fest. Art Hearts was ahem, highly artistic. There were scantily clad guys and girls and it was the only show in which I saw male models with hipster Smith Brother Cough Drops beards. ‎Some of the male models sported hip hop looks and some old-school tweeds jackets. The female models sported some of the shortest skirts on the runways of Fashion Week, and some of the applique-covered Cinderella-inspired gowns were so difficult for the models to walk in (due to multiple puffy pettitcoats) that stylists and designers had to come out to help them walk back to the dressing room! There were plenty of wearable items for day and evening though even though the more eccentric elements of Fashion Week were on parade for sure! 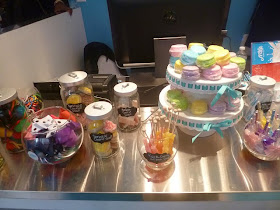 The partying started off even before NYFW even started. Fashionistas brought their kids to the new Milks & Cookies Kids Spa at First Avenue & 64th Street to get their kids pampered--there were dozens of mini-fashionistas getting chic cuts and highly detailed kids' pedis and pedis. As the name implies, there is a milk and cookies bar with spinning chairs where warm Otis Spunkmeyer Cookies and Nestle's Quik in Chocolate and Strawberry are served from special beverage fountains. For more info, check out their official FB page, www.facebook.com/milkandcookieskidsspa. 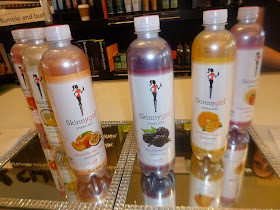 After kids were sent to the grandparents or nannies, NYFW-bound adults started off by preparing with manis and tans courtesy of Fake Bake at Caravan Style Studio. Journalists and other fashionistas put stripped down to get head to toe tans in the very special Fake Bake tent and get sprayed by one of the Fake Bake staff experts who came up with the perfect shade of tan for everyone and recommended products to extend their tans. Valerie, the owner of Caravan does elaborate manis and can offer great style advice; it's located on the ground floor of The Carlton Hotel in midtown. (For more info, go to www.caravanstylestudio.com.) One of the most creative NYFW events I attended was the FashionXTech Mobile Fashion Week Lounge, which featured the famous tourist bus known as The Ride taken over by fashionistas who got picked up on an hourly basis in front of Lincoln Center and driven around town--all while learning about new fashion and beauty gadgets on the screens inside The Ride. On the ride I took, Project Runway All-Stars II winner Anthony Ryan AUld hopped on and both the press and host Nexpert's own Katlean de Monchy picked his brains about his Project Runway experience and what his next career plans are. It was followed by a great cocktail party at Sanctuary where press and fashionistas checked out the latest high tech fashion/beauty/smartphone gadgets hands on including wonderful Singer sewing machines that create intricate embroidery.My favorite lounge was by legendary milliner Eric Javits in a suite at the Empire Hotel, who was displaying his whole line of Fall/Winter '15 hats. The line had incredibly diversity from 70's style Carly Simon floppy felt hats to velvet brimmed beanies with fur pom-poms. Fashionistas ate colorful macarons while posing in front of a step and repeat in many of the wonderful hats--and there were many wonderful leather bags to be "tested out" included some intricate woven ones. Javits proved once again while he is the #1 hat designer in the world and why his designs sell out every season in Bloomie's. 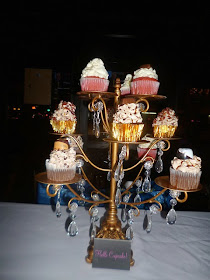 Nylon Magazine took over the super hip rooftop of the Gansevoort Hotel in the Meatpacking District for a couple of days and Fashion Week visitors were treated to hair, makeup, massages and manis--and my favorite part was the ten-minute chair massages courtesy of Exhale Spa. Beautypress.com had fashionistas and beauty press (natch!) through at a special event called Spotlight Day at the Midtown Loft And Terrace in the Flatiron District. Everyone perused and sampled wonderful beauty brands like My Amazing Blow Dry Secret hair line (which cuts blow drying time in half) and Ottilie & Lulu, a great new all-natural tween skincare line--and they ended their visit with gel manicures and champagne! The multi-tiered emerging designers showroom Bene Rialto was the site of a wonderful NYFW Collective Lounge and fashion editors took in Chocolate Therapy session, got their eyebrows waxed courtesy of Wink Brow Bar and got wonderful hand scrubs courtesy of Key West Aloe products. They were also able to get skin consultations with Rescue Skin representatives and electrolysis consultations from Electrolysis Of Williamsburg Brooklyn, which is rated five stars on Yelp!. Plus Size fashionistas were not forgotten as they parties the night away at Bait & Hook on East 14th Street. Everyone was diggin' the Cupcakes By Kay display done on a candelabra and Glennmade Confections Booth but the male visitors loved oogling the gorgeous plus size models on hand such as Jordan Tesfay. The biggest NYFW suite outside of the one Maybelline held at Milk Studios was Tech Style Takes Manhattan at the Bumble & Bumble Studios in the Meatpacking District. Attendees were even invited to a cocktail event in the same space after the suite was over, and they were able to test the latest wines from Blue Nun and latest Skinny Girl Sparklers, get samples and blowouts from Bumble & Bumble staff and even download a new fashion selfie app called Stylinity. Sponsor Go Green Ride gave attendees rides home and attendees and even got a special yoga class led by Dr. Oz's personal trainer, Joel Harper.

It was yet another crazy NYFW but what makes it great is not only the fashions and the festivities but that in general, you never know what to expect!