Tech Meets Love: Wattpad and After by Anna Todd

By: Finance Foodie, in conjunction with One2One Network

I recently was sent a copy of the book After, by Anna Todd. Being an avid reader, I was interested in this book not only for its juicy plot (good girl college student falls in love with a troubled bad boy) but for the unique way this book was written. 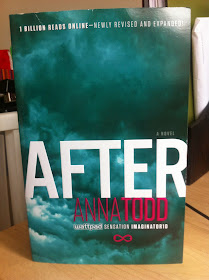 The author Anna Todd is not a typical trained journalist. In fact, this 25-year-old army wife and One Direction überfan is a first time writer who never thought she would be an author. She did love reading however, so during the time her husband was away in Iraq, she started writing the After series on Wattpad, a free social reading and writing app. The After story revolves around an on-off love story between good girl Tessa and bad boy Brit Hardin (inspried by One Direction singer Harry Styles)

A year later, Anna’s story had over 1 billion reads and more than 6 million comment. Anna was able to get the word out about her fanfic book through social media, connecting with her fans from around the world.

Anna's hobby now has turned into a book deal. Simon and Schuster is now publishing the four book series, with the first one released in October of this year. You can buy the book at Barnes & Noble http://w.tt/wp or on your E-reader: http://w.tt/sns2. You can follow Anna on Wattpad as Imaginator1D: http://www.wattpad.com/user/imaginator1D and on Twitter at @Imaginator1Dx https://twitter.com/imaginator1dx

Full Disclosure: I participated in the After by Anna Todd program as a member of One2One Network. I received compensation but all opinions are my own.