The Grand Tasting At The New York Food & Wine Festival: Feasting, Fun And Doing Something Nice To End Hunger!

I recently attended my first-ever Grand Tasting at The New York Food & Wine Festival at Piers 92 and 94 even though it’s been happening for seven years now. I was expecting something like the Fancy Food Show at the Javits Center, of which I am a longtime veteran. There are a lot of similarities although there are less foreign food brands than at the Fancy Food Show. Do you get as stuffed walking around and sampling from more than 100 booths? You betcha. I gained five pounds yesterday from all that feasting—plus, this year there were more than 100 types of wine to try, not to mention a lot of bourbon and rum! 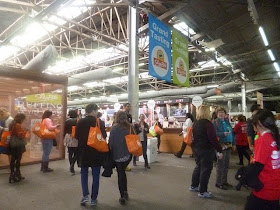 Shop-Rite is the main sponsor of the event, and they had the huge booth in the middle of Pier 94 that included two dozen tastings of recipes made with some of their best-selling brands including a fantastic Thai Hot Dog made with Black Bear Hot Dogs and fantastic chopped mangos and red peppers. I fell in love with some of the packaged snacks I got to sample there including the new Fiber One Streusel Bars, Ferrero Raffaelos and the super-classic “Dixie cups” of Haagen-Dazs Vanilla Bean Gelato.
I did not hit most of the wine area—they had a special area with higher end wines called the Gems Area—but I did sample the Kibo Sake in a can. Sad to say that their factory was destroyed in the recent Japanese tsunami and I hope that their exposure at the Food + Wine Festival helps get them back in their feet. I was impressed that you could buy their Junmai Sake in cans. That is a first in my book (for more info, go to kibosake.com). There was an Asian food area that included giveaways of fantastic sauces and spice you could use at home, including Kikkoman’s new Kung Pao Chicken Seasoning. There were plenty of pasta stations including a particularly popular Barilla one way in front of Pier 92—they handed out three new shaped of pasta including a super-mini shell shape with their traditional all-natural sauce.
There were indeed some folks I had met at the last Fancy Food Show last summer that I was happy to run into again and sample their wares. The first one was Bongiovi Sauces. The affable John Bongiovi, Sr. (yes, he is rocker Jon Bon Jovi’s dad) was a joy to talk to again and I was impressed on how hands on he was at his booth, plating the food and heating up sauce. He also participated in an annual Food & Wine Fest pizza party that his marinara sauce is one of the stars of! I also saw my peeps from Garden Lites—who possibly make the highest quality light frozen entrees as well as muffins/brownies on the market today—and Skinny Girl Cocktails, who served both their cocktails and sparkling flavored water beverages. The Beanitos people seem to be wherever I go from Fashion Week to different beauty press events—they were handing out their new White Bean Chips and they are really fresh taste in that particular market at only 200 calories for a generous size bag. There were New York restaurants serving their innovative dishes including strip steak from Ben & Jack’s Steakhouse and numerous restaurants served short ribs. I must have counted four including the Texas Brazil churrascaria restaurant a couple of doors down from Dylan’s Candy Bar.
Did I fail to mention all the celebrity chefs giving demos? The funniest moment of the demos was Paula Deen busting in on her son Bobby trying to cook a little healthier than his mom—but yet she kept asking where more butter was being kept to the onstage assistants. She turned her son’s somewhat healthy recipe for Chocolate Chip And Macadamia Nut cookies into her own more fattening recipe for it. When no spatula was in site, Ms. Deen had to flatten the cookies out underneath parchment papers. She told the audience she preferred her cookies thin and crispy and that was why she was flattening them out so much. It was equally funny later when her husband Mike—whom she called “My Fat Boy”—was getting ordered around while making green beans and she forgot that she threw out the boiling water for the pasta that was supposed to accompany them. Foodies were able to meet and greet with Paula and her hubby at the Springer Chicken table and she did some book signings as well. Other star chefs doing demos at the Grand Tasting included Marcus Samuelsson, Rachael Ray and Martha Stewart.
Will I return to the Grand Tasting again next year? You betcha—but I won’t get on the scale the next day especially after I ate almost all the handouts I got in one sitting!