As the weather gets (finally) cooler, nothing screams fuzzy sweater weather better than a nice big pot of Japanese shabu shabu. For those unfamiliar with this delectable dish, shabu shabu consists of placing thinly sliced raw meat, vegetables, and noodles in lightly seasoned boiling water, then dipping the contents a variety of sauces and consuming with steamed rice. Not only is this dish fulfilling and flavorful, it is also healthy and low(er) fat due to the cooking technique. Last week, I was invited to check out Shabu Shabu Kobe, a soon-to-be-opened Japanese resto specializing in shabu shabu – of course I had to grab my fuzziest cardigan and head over to Midtown for a visit. 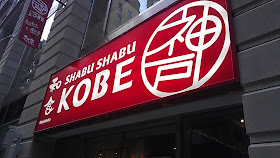 Shabu Shabu Kobe, which bills itself as “a unique izakaya serving several Japanese specialties,” is supermarket powerhouse Kobe Bussan Group’s first restaurant in the U.S., and it will be one of the largest Japanese restaurants in New York. During the pre-dinner press conference, Shoji Numata and Hirokazu Numata, the CEO and President of Kobe Bussan Group, discussed their future plans for the U.S. market, which already include the opening of two more even bigger restaurants in NYC in February and April of next year.
But enough background - on to the food! The evening centered around the Tokusen Gyu Akami Niku Set ($25), which included everything you need for a great shabu shabu dinner – the meat (prime beef), assorted vegetables, tofu, ramen and glass noodles, and the “dessert of the day” (more on that later). I noticed the beef’s flavor profile was much more vivid than most of the restaurant shabu shabu meat I’ve eaten. I later learned that the Kobe Bussan Group has a special proprietary way of slicing their meats so they can preserve the freshness without having to freeze the product - hence producing a tastier product.
We also sampled the Toro Salmon Zanmai Mori ($35), their “extravaganza” of three differently seasoned salmon and the Jiman Big Tonkatsu ($15), a massively scrumptious plate of deep fried aged Pork Cutlet (this was the more caloric item of the night – but we all gotta live a little right?).
The night ended with our “dessert of the day,” the Nagomi Matcha Warabi Mochi ($5). This delightful Red Bean Paste with Matcha Powder and Green Tea Gelatin had just the right amount of bold sweetness to end the meal on a high note and had us rolling out happy, healthy, and comfortably satiated.