Steve Schirripa: He Makes A Sauce You Can’t Refuse!

As part of my job, I get to attend some of New York’s coolest events (sorry if it sounds like I am bragging, but I am not), and I recently attended one at Grace’s Trattoria that got me VERY excited since I am the world’s biggest Sopranos fan! 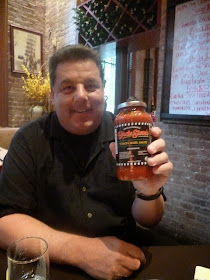 Former Sopranos cast member Steve Schirripa showed the world that his mom’s Sunday sauce recipe was world class by bottling it and calling it Uncle Steve’s. There is Marinara, Tomato & Basil and Arrabiata. Schirripa and his colleagues from Uncle Steve’s Italian Specialties decided to do a big launch party opened to the public this past Wednesday night. Schirripa made a point of signing jars of sauce, wooden spoons with his company’s logo on it and posing for photos for a crowd as diverse as the Upper East Side itself. I got to speak with him about his growing food products company before the signing—and best of all, tasting—got started! He told me, “We have other products in the works. We are just concentrating on launching Uncle Steve’s sauce right now and I think it will be a success not just because it tastes great but also because it’s sugar free, gluten free and organic. We get our tomatoes sent over from San Marzano, Italy. At present, we are discussing doing a pasta line, olives and olive oil.” 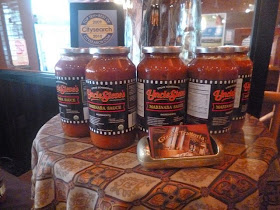 I can testify that all three sauces taste FANTASTIC and like they just came out of the pot—I am a full-blooded third generation Italian and admit that I have a pretty selective palate when it comes to sauce (also known as “gravy” in some circles)! Schirripa had a particularly tough year as former cast mate (and close friend) James Gandolfini passed away in June and his mom passed away in July. He told me, “This sauce was developed from her recipe and I think is a fitting tribute to her. She would make a lot of sauce and then jar some of it up and a local store would sell it—it’s says something that Bensonhurst Italians would buy her sauce! I think I have actually improved upon it and I am really proud of it. I am not a jar sauce kind of guy but I think it is really good. The name of the sauce came from the fact that my friend and business partner Joe Scarpanito calls me ‘Uncle Steve.’”

The friendly and funny Brooklynite concluded on a philosophical note, “There is something special about tomato sauce—It brings you back to both the good times in your life and the bad times in your life.” The crowd at Grace’s Trattoria not only enjoyed meeting a great actor (and a great guy) but got to sample short ribs in Uncle Steve’s Marinara Sauce, pizza made with fresh mozz from Grace’s Marketplace and Uncle Steve’s Tomato & Basil Sauce and gnocchi in Uncle Steve’s Arrabiata Sauce. I plan on cooking at home with all three sauces this week and developing some of my own recipes, including a low-carb Chicken Cacciatore made with the Arrabiata! You can purchase Uncle Steve’s at Grace’s Marketplace and online for $7.99 at unclestevesnyc.com. A three bottle minimum is required if you order from the site and takes 8 to 10 days for delivery. Be sure to catch Schirripa in his Investigation Discovery Channel show Karma’s A B*tch as well as his new films Jersey Boys (where he plays a barber) and Chasing Yesterday (where he plays a priest).