I was lucky enough to attend the blogger's launch party for the Brother Jimmy’s BBQ cookbook called Brother Jimmy’s BBQ: More Than 100 Recipes For Pork, Beef, Chicken And The Essential Southern Sides last week and was able to sample some of the menu items that are exclusive to the cookbook and some that can actually be purchased at their numerous eateries in NYC. The book actually hit the stores in June and feature recipes from executive chef Eva Pesantez and owner Josh Lebowitz. 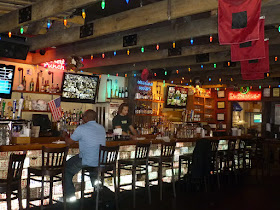 I was especially excited to get to try their Chicken 'N Waffles, as it is impossible to get south of Harlem with the possible exception of The Pink Tea Cup. Brother Jimmy only serves it at their Murray Hill and Union Square locations and only for Sunday brunch. The chicken batter is quite mild and the waffles are firm and golden on the outside and soft and fluffy on the inside--and are served already lightly swirled with pure maple syrup. ﻿﻿
The Brother Jimmy's Hush Puppies taste of sweet cornmeal and are void of any greasiness you might have encountered in many of the well-known barbecue joints around town. They come with a small bowl of homemade maple butter than is one of those sinful-but-worth-it soul-satisfying spreads. You'll want a bowl to take home to put on EVERYTHING.
The Smoky Corn & Black Bean Chow Chow is a healthy winner. It had next to no oil and most of the flavor comes from the cilantro, red peppers and lemon juice. This has disappeared from BJ's menus but is quite easy to make at home using the cookbook. The cold Sweet Potato Salad is another light and refreshing dish where keep the oil to a minimum in the dressing and the potatoes are the perfect texture without getting too mushy. Sweet potatoes seem to rarely be served in cold dishes and this is one of the most "winning" and healthiest dishes ever to be served in terms of barbecue sides. ﻿﻿
The Mini Red Velvet Cupcakes are made in a miniature size and you get a few in each serving at the BJ eateries. The cupcakes are super-moist and flavor-packed and the icing is made of fresh cream cheese. They are among the best I have had in the city as the icing is not made overly sweet--that is always the kiss of death for me as inexplicably, many trendy bakeries including the legendary Magnolia go overboard with the confectioner's sugar in their frosting.
What is most exciting to me as a 'cue fanatic is that the Brother Jimmy's Cookbook finally gives away--after twenty plus years of nearly FBI-level security--the recipe for their famous Dry Rub Ribs. These are arguably the most succulent ribs in Manhattan and they prove that five hours of slow roasting with no sauce is the way to go to get the juiciest ribs north of North Carolina (where original owner Jimmy--who is now a consultant to the BJ restaurant chain--hails from). Two dozens spices including cumin and black pepper make up the classic seasoning which is not unlike a classic New Orleans blackened seasoning.
If you would like to earn a year's worth of free food at Brother Jimmy’s be sure to "holler" at the BJ gang on twitter. Just follow the at http://twitter.com/brotherjimmys and tweet to your friends that they can win a year’s worth of free food at Brother Jimmy’s and be sure to add the hashtag #brotherjimmys at the end (but hurry as contest ends 9/5). The Brother Jimmy’s BBQ Cookbook is available at the restaurants and on amazon.com and bn.com.