On Location Tours just premiered their new Classic New York TV & Movie Sites guided bus tour--so financefoodie.com got to spent a fun-filled afternoon touring the most filmed city in the world -- and totally got a nostalgic behind-the-scenes look at some of everyone's favorite Big Apple classics. This new tour offers a hearty bit of New York’s rich TV & film history and a chance to experience historical landmarks and sites through the angle of a camera lens. We recently took the tour with TV legend Joyce Randolph and on our way to get onto the bus with her, we met up with Sopranos star Jospeh Gannascoli (whom we have met on the On Locations Sopranos Tour twice and since have become Facebook friends with). On our tour with the still-gorgeous Ms. Randolph, we saw sites from The Seven Year Itch, Breakfast at Tiffany’s, The Apartment, The Honeymooners, Taxi Driver, The Way We Were, Manhattan, The Godfather, and many more. 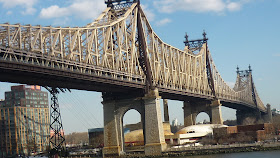 The tour starts at 51st Street and Broadway by Ellen's Stardust Diner and after taking in some midtown sites like the Ed Sullivan Theater (where The Honeymooners was shot), and moving around Columbus Circle/Central Park South (which includes a view of the Ritz Carlton where Regarding Henry was filmed) and up Central Park West (which includes scenes with the Stay-Puft Marshmallow Man in Ghostbusters and many celebrity homes -- including Madonna's home with ex-husband Sean Penn at the San Remo and The Dakota). 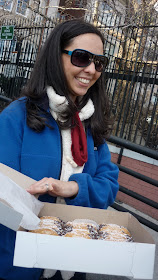 The tour then stopped on the Upper West Side for snacks at Zabar's and then carried on to Sutton Place (at a landing on 58th Street and the East River), where tour members were given a small cannoli in honor of The Godfather line, "Leave the gun, take the cannoli." Next on the agenda was a trip to the Upper East Side to 169 East 71st Street aka Holly Golightly's front door. The final stop on the tour is at Grand Central where a famous "family" meeting scene takes place in the Campbell Apartment, which is now open for cocktails starting at noon most days. 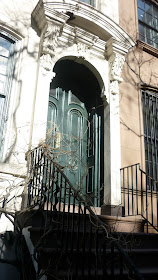 But the best part of the trip? Having Ms. Randolph along for the Valentine's Day tour -- she is not only looking good and in fine spirits, but she gave us the tour members the inside scoop on filming The Honeymooners when we got to the Ed Sullivan Theater. Joyce told us, "Jackie (Gleason) only wanted to do the show on weekends so we got the scripts on Saturday and shot on Sunday before a live audience, and of course, Ed Sullivan needed the theater for Sunday nights. We didn't have a lot of time to learn our lines, so Jackie told us that if we forget them to 'just adlib in character.' He had one friend who came and played many small roles because he was so good at ad-libbing. He would come on the show and look different each time." The fabulous Ms. R also added that she had to do her own makeup, but said it helped her be so good with it today (we have to say her makeup looked impeccable on our trip and it looked like it was applied by a professional makeup artist). 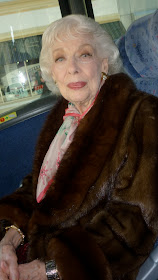 We interviewed Ms. Randolph on the bus and got an exclusive inside look at her life now. She has lived at the same husband-scouted, two-bedroom apartment building at 90th and Central Park West since 1959 since she became pregnant with her son, Randolph Charles (who is now the owner of the largest medical book company in the world) and enjoys an 18th floor view of Central Park. She does not really act anymore but is a top officer in the Lamb's Club and regularly attends their meetings downtown; she is also on the Board Of Directors for the USO. Her favorite restaurants include Donohue's Steakhouse and Le Chat Noir. When we dropped Miss Randolph off in front of Bergdorf Goodman's towards the end of the tour, we felt that we had made a new friend. 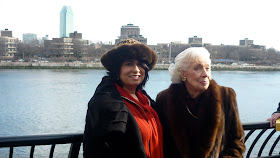 For tour highlights, bookings and more, visit http://www.screentours.com/classics. The tour is three hours and there are multiple screens on each bus so that the tour guides can show you each famous TV location as you drive up to it. A great time is guaranteed for all--even if you haven't heard of all the nearly 100 movies and TV shows mentioned on the tour. It's fun for people who just want to learn more about the tasty history of popular culture in the Big Apple as well.