Having just reviewed Alta, one of New York’s premier tapas restaurants, I was thrilled when Ethan and I were invited to attend a book launch event for: tapas! The Book of Tapas is a new book of recipes written by Simone Ortega and her daughter Inés Ortega featuring over 250 tapas dishes published by Phaidon Press. Phaidon, known for being a leading publisher in the world of visual arts hosted the book launch event at their store in SoHo with about 40 or so writers, bloggers and foodies in attendance. 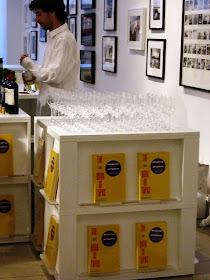 The Phaidon Store itself occupies a large and beautiful space with a kind of openness that’s hard to find in crowded New York. All the books in the store were all extremely artistic and aesthetically pleasing, which really added to the overall laid back atmosphere of the event. Enclosed in each copy of The Book of Tapas was a bright yellow card (the menu for the evening). Having done my research ahead of time, I knew that the tapas were going to be prepared by Alex Raij, who is famous for her two NYC tapas restaurants Txikito and El Quinto Pino.

The first dish I tried was the Chorizo con chocolate, which was akin to dinner and dessert in the same bite, as the chocolate mixed with Chorizo created a unique sweetness that was spiked with a bit of salty flavour. 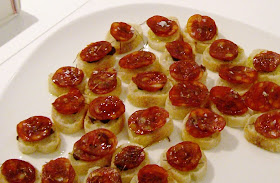 Next I tried the Salt Cod and Spring Ramps. I have to admit that this dish really threw me off because it was hard to believe that this was actually cod when it looked more like mashed potatoes. Again I was impressed by the creativity: not only did the cod mix well with the bread, it actually had the smoothness and consistency of mashed potatoes! 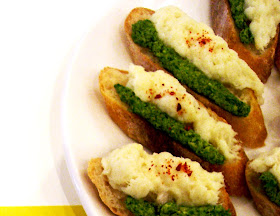 The Gazpacho was also nothing like what I expected. The previous few times I had gazpacho, it was tangy, red in colour and not too thick. This gazpacho was creamy, orange in colour and quite thick. Even though this threw Ethan off a bit (him having had much more gazpacho in his life than I have had in mine), I really enjoyed it because it was a new experience for my tastebuds. 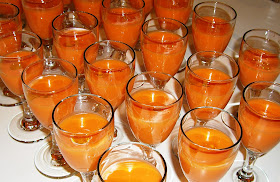 Despite our differing opinions on the gazpacho, the best moment of the evening was when we agreed on how delicious the Fava Bean Stuffed Serrano Ham Bundles were. Normally, I do not eat raw things - I eat my steaks well done (and no, that’s not a waste of a good steak) and I don’t eat sashimi when I go for sushi - as it's hard for me to believe that something served raw can be classified as “cooking”. With this in mind, I was very reticent about the Serrano ham. I watched as Ethan ate with enthusiasm. “This is excellent!” he remarked. I continued watching him as he chomped away. “Try it!” he said. I hesitated. Finally I gave in and decided, "what the heck, how bad can it be?" To my surprise it was amazing! Ethan was proud. 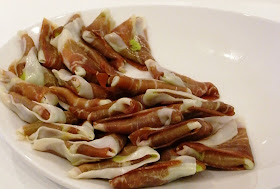 At this point in the evening, the organizers brought out Alex Raij to talk to us about her creations. Alex explained her love of tapas and some of her inspirations - touching on the importance of eating tapas with wine. She explained how in Spain, there is not a lot of street food because the bar ‘spills’ into the street and thus tapas are effectively the Spanish street food. When asked whether she knew the original story of tapas, Alex replied that she knew several versions, but was unsure of which one was accurate. One version is that Tapas (which means “to cover”) originated as slices of bread with ham on top served with sherry. In order to prevent fruit flies, people would use the tapas to cover their drinks. After Alex entertained all of the questions from the audience Ethan and I went back to eating. 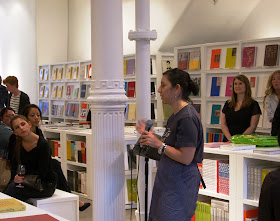 To finish off the evening, I tried the Chilled Shrimp, Onion and Avocado as well as the Classic Potato and Egg Omelette. The Chilled shrimp was tangy and light and went very well with the avocado. Ethan speculated that they used a lime based marinade (which we will attempt to try to make at home). The omelette was also something new because it had the consistency of a French quiche. I was extremely excited about the omelette because it reminded me of a traditional Shanghainese dish that mom used to make for me when I was younger called fried eggs and potato. Seeing as I believe my mom to be the best cook in the world (don’t we all believe that about our moms?), I was delighted because this potato omelette was like a Spanish take on mom’s dish and it turned out great. 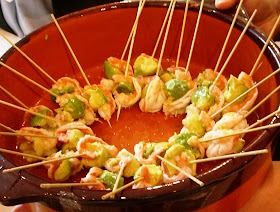 At the end of the evening, Phaidon gave us all a nice gift bag each with a Wallpaper City Guide. The Wallpaper City Guides are meant for the design conscious traveller and features guides to all things design - I got one for Madrid and Ethan got one for Seville.  For now, we were both full with delicious tapas and counting the days on when we could go to Txikito and El Quinto Pino for some more!

The Book of Tapas
By Simone and Inés Ortega
Published by Phaidon Press, New York
Available at Phaidon Online or on Amazon.com for pre-order to be released May 19, 2010