It may seem strange to a lot of people that a girl who grew up in the land of cowboys (Alberta, Canada) would be a self proclaimed ‘Francophile’. While cowboy culture is known for its down to earth style, the French are known for…well anything but! Ever since I was a little girl, I dreamed of going to Paris. I learned French, something very rare for Albertans and I watched all the popular French movies. You can imagine the sheer excitement for me when I finally booked my trip to France this past January. I was not only counting the days, but the minutes till I could finally see France for myself.

And then a volcano erupted.


I decided that the only way I could comfort myself was through eating and more particularly eating French food. Though I never fully appreciated French food during my childhood in Alberta, 3 years of living in Montréal (Québec, Canada) opened up a world of French cuisine to me. From the hard baked French breads to the fatty but mouth-watering foie gras, I took to French food like a kid in a candy store.

Since Ethan had also taken to French food, he recommended going to Balthazar, a popular French restaurant in SoHo. He had gone at least twice before, but both times he was there, he only had the Seafood Tower (plateaux de fruits de mer) so this time he wanted to try something new. 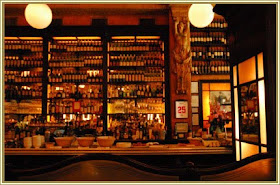 Though our reservation was for 10PM on a Tuesday evening, when we went the restaurant was still fully packed. The atmosphere felt undoubtedly French; the restaurant even has several large mirrors which look like they’d seen at least two world wars. This was not Paris, but I felt that it was definitely close.

I started with the Grilled Octopus Salad which came with arugula and potatoes while Ethan ordered the Lobster Risotto. Both were beyond expectations. Ethan’s risotto was the perfect consistency, not to overcooked and not too creamy. The lobster chunks were significant and blended in perfectly with the rice. My grilled octopus was excellent but what impressed me most were the potatoes. Now, I LOVE potatoes and have eaten them cooked in at least 20 different ways, but these potatoes were done in a pickled fashion which I had never had before. They were tangy with a fresh crisp consistency and amazingly did not taste like they were undercooked which can easily happen with potatoes.

For the main course, I ordered the Duck Sheppard’s Pie and Ethan ordered the Berkshire Pork Chop. Before going to the restaurant I had already decided on the duck sheppard’s pie because not only is duck one of my favourite meats, I also LOVE sheppard’s pie. I once ate a sheppard’s pie in Montréal at a restaurant called Kitchen Galerie which had a blend of pork, lamb and beef so I had to try the sheppard’s pie with duck. When my duck sheppard’s pie arrived in a cast iron bowl, I hardly waited a second to dive in. The mashed potatoes on top was incredibly creamy and the duck was nothing short of perfect. Having used duck confit (confit de canard) in the sheppard’s pie, the dish turned out to be very rich and flavourful. According to Wikipedia, “confit” is a “generic term for various kinds of food that have been immersed in a substance for both flavour and preservation”. In French food, confit de canard is very popular especially in south-western France and is usually prepared with duck legs. I am a strong believer that North Americans need to eat more duck which many believe is healthier and more versatile than chicken. Both the Chinese and the French feature a lot of duck in their cuisine and I am thankful to be part of both duck loving cultures! The thing I loved the most about Balthazar’s duck sheppard’s pie was the fact that the tiny bits of celery and carrots mixed into the pie were still crispy despite the moist duck and potatoes. I was delightfully surprised to find the crispiness of the vegetables in my pie because it created a very interesting contrast in textures. The only thing I wish I had was some salad on the side to balance out the abundance of the pie. Other than that, the pie was more than divine 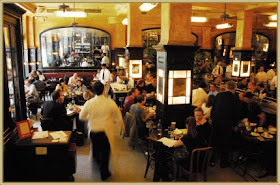 Ethan’s Berkshire Pork Chop was huge. It came with bacon and mushrooms on top with brussel sprouts. I could tell he was thoroughly enjoying his as I did mine because I realized that both of us had stopped talking for about 15 minutes just because we were both too busy consuming our food. Ethan was impressed by how consistently the pork chop was cooked all the way through considering how thick it was and loved that it came with bacon on top. Ethan lamented how sad it was for those who could not eat pork because to him, pigs provide the most diverse array of delicious meats bar none. Ethan enjoyed his pork chop so much that he ran out of sauce towards the end and started dipping his pork chop into my duck confit. 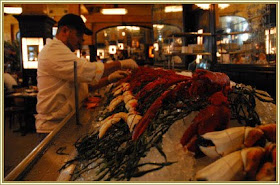 By the end of dinner we were both too full to have dessert. I looked longingly at the dessert menu as was so happy to find ‘profiteroles’ on the list that I was almost tempted to order it even though I was overflowing with food. I told myself that next time I come, I will definitely have to save room for the profiteroles and the pineapple flambé. As we finished our dinner, I looked over at the table of three guys who were still trying to get through the seafood tower. Three layers of seafood is a lot of food, even for three grown men. I made a mental note that next time I’d have to try that too. With all the other menu items I had made a note to try when I came back next time, I knew that I’d have to either grow a bottomless stomach or starve myself for three days.

Though I am still devastated about losing my trip to France, dinner at Balthazar helped me get over my depression and I will just have to keep coming here for my authentic French food fix until I go to France. Bon Appétit!