Blue Hill at Stone Barns is a restaurant set in a beautiful, rustic farmhouse with rolling hills and pastures located 30 minutes from Manhattan in Pocantico Hills, New York. According to people who have been to both, this location supposedly knocks the socks off of its sister Manhattan location. My friend and I came for their Sunday brunch and sat right next to a window so we could gaze out at the clear blue sky and fluffy white clouds as we enjoyed our meal. 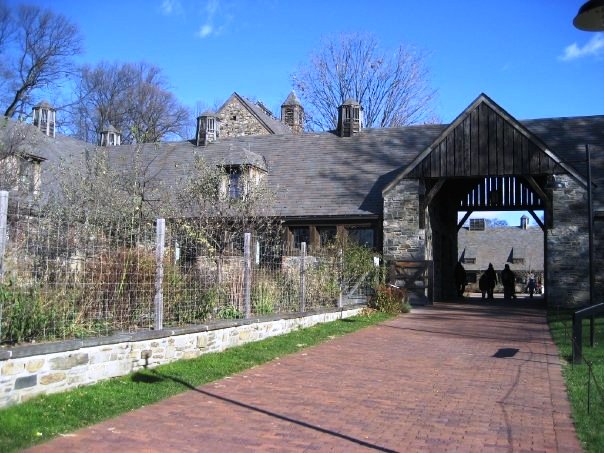 I highly recommend going there for lunch ($68 for 4 courses on a Sunday - lunch starts at 11:30 a.m.) because you get to wander around the grounds afterwards and it's also the best deal out of all of their prix fixed menus. It's a short train ride away from Grand Central and then a 5 min cab to the farm from the station. The farm is really pretty during the day, but I imagine it would be kind of dead at night since it's kind of in the middle of nowhere.

Upon sitting down, the servers immediately began cutting loaves of freshly baked bread, which arrived warm at our table. Butter was also softened which made spreading on the bread easy. Bread slices were big and hearty (soft in the middle, crusty on the outside). 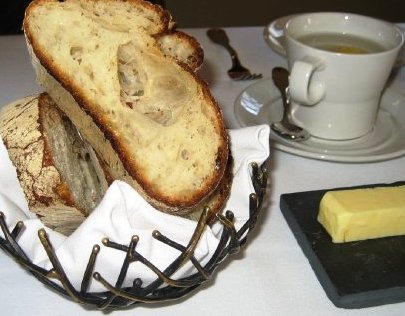 The best part about the meal was the element of surprise! The menu that they present you in the beginning basically just lists all of the ingredients currently in season. The server then asks what type of food you like, don't like, any allergies, etc. My friend and I requested no gamey meats but were fine with everything else. The server then takes this information to the chef who customizes a menu for you! Pretty much every table we saw received different, but all delicious looking plates. Blue Hill definitely gets points for innovation and care put into its execution.

We then looked around at other tables and saw some groups had these stands with little produce on them for them to nibble on. One table had multi-colored cauliflower and one table had carrots. When we asked our waiter if we could get one too, he made a special one for my friend and I with two baby carrots on each end and white and purple cauliflower in the middle. This made me extremely happy! 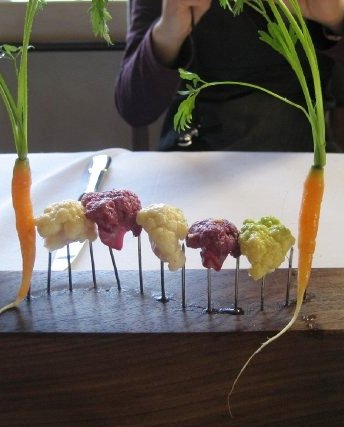 Our first course was a salad with the most amazing beets I have ever had. They were big and juicy and came in two varieties: red and gold. I have never had golden beets before, but am now a big fan. This was paired with pine nuts, cranberry sauce and drizzled with home-made yogurt. The combination was pure genius. 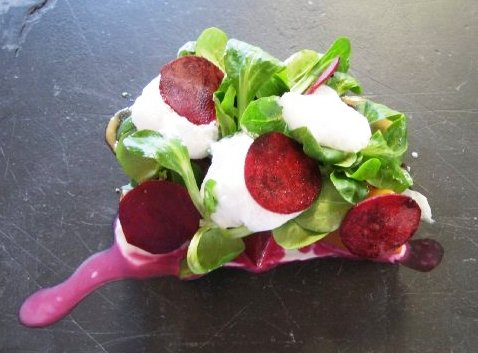 The second course was sea bass which melted off of my knife when I cut into it (it was that buttery in texture) with some kind of citrus-y glaze and walnut pieces that added a great crunch to the texture. I finished every bite of this one. 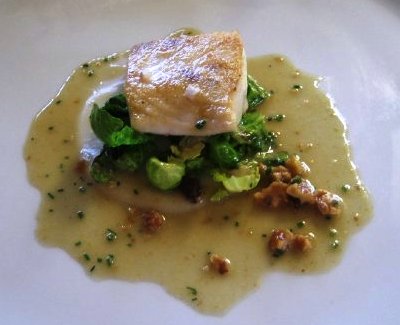 The third course was the stone barns berkshire pig with spaetzle and collard greens. The pork was incredibly tender and i loved the spaetzle which i've never had before, but reminds me of this taiwanese breakfast egg crepe (found out spaetzle is a type of egg noodle/ small dumpling that's boiled and then sauteed). The dish also included a cut of the softest pork sausage and pork belly. I almost teared up eating this one. 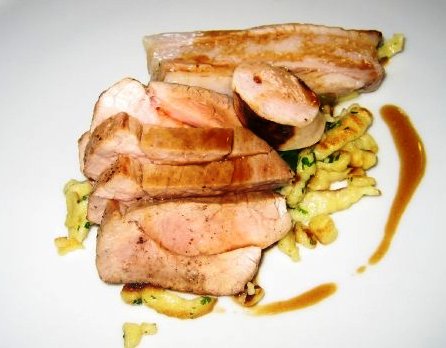 Last, but not least, the geniuses of Blue Hill gave my friend and I each a different dessert so we could sample each others! I had the Apple and Hazelnut Gratin with rosemary ice cream which was basically like an apple tart but covered with what seemed like a spicy gingerbread layer (reallly good).

Overall, I felt the ambience, food, friendly service (which definitely went above and beyond our expectations) made for an exceptional experience! I would definitely come back again.